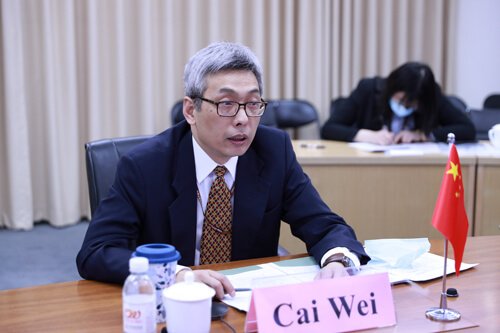 The Director General of the Department of Latin America and the Caribbean of the Chinese Ministry of Foreign Affairs, Cai Wei, has been in constant contact with the Latin American and Caribbean region since early last year. He has held a number of meetings to discuss issues of common interest with various officials in the region, including development, cooperation, and China’s relations with LAC. An example of this was his attendance at the II Forum of Ministers of Agriculture China-Latin America and the Caribbean and the delivery of a speech, where he reiterated China’s interests in maintaining relations with Latin America and the Caribbean. He also attended CELAC’s XXXI Meeting of National Coordinators, where he acknowledged the work of CELAC for integration in the region and affirmed that China attaches great importance to the relations it maintains with these countries.

Throughout all these meetings, China has shown particular interest in Uruguay. On February 8, 2021, Cai Wei met with Fernando Lugris, head of diplomatic missions of Latin American and Caribbean countries in China and ambassador of Uruguay to China. As a result, both countries expressed their willingness to maintain bilateral relations with each other. Uruguay has announced that it will soon receive a visit from Cai Wei. The Uruguayan government also announced that it will formally initiate negotiations for a Free Trade Agreement with China.