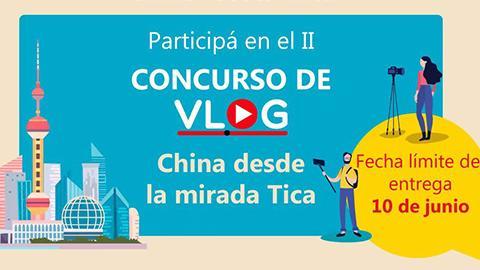 The Embassy of China in Costa Rica officially opened a call for entries for its second Vlog contest, “China from a Costa Rican perspective”, as part of the 15th anniversary of the establishment of diplomatic relations between the two countries. The Chinese Embassy, jointly with the Embassy of Costa Rica in China, and the Chinese national news network, China Global Television Network (CGTN), invite all Costa Ricans, of any age and part of the country, to submit a video lasting two to five minutes before June 10.

The most attractive videos in terms of theme and production will win the top prizes. The videos submitted can be about stories that reflect the friendship between China and Costa Rica in fields such as the fight against pandemics, green development, technological innovation, and cultural exchange. Participants can also review their perspectives on any topic of interest about the Asian country. There will be 28 winning entries, with one first-place winner, two second place winners, five third-place winners, and twenty-fourth place winners. The prizes include a Huawei Matebook X Pro laptop, Huawei P50 Pro cell phones, Xiaomi Mi 1S electric scooters, and Huawei Sound speakers, and will be awarded by the Embassy of the People’s Republic of China.